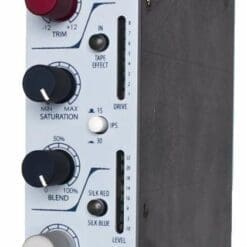 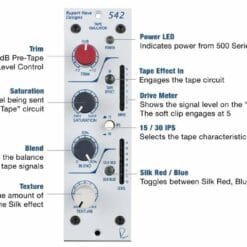 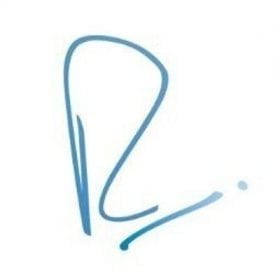 Features
TAPE In
Sends the signal through the “True Tape” circuitry, which is affected by the saturation, blend and 15 / 30 IPS controls.
TRIM
Provides +/– 12dB adjustment of level on incoming signal levels, prior to the tape circuit.
SATURATION
Controls the signal level being sent to the “tape head” circuit. As the saturation level increases, the level on the “record” head rises, and the replay gain is reduced so that the overall output signal level remains more or less constant. In a real tape recorder, you would adjust the record and replay gain controls separately – however, in the 542 the record and replay gain controls are coupled so that the overall signal level only varies as the “Tape” saturation level changes. As you approach maximum saturation setting, the output signal level will drop due to the effect of extreme saturation and soft clip.
Additionally, to compensate for low frequency loss at low “record head” levels, the saturation knob also controls a low frequency compensation circuit that boosts low frequencies more at low saturation levels, and tapers off at higher levels. This function can be useful on many sources like bass and kick drum to find the balance between a clean, boosted low end (low saturation) and a denser, more saturated low end (high-saturation).
15/30 IPS
Selects the pre-emphasis / de-emphasis, record / replay tape characteristic. The 15IPS mode has a significant “head bump” in the low frequencies centered around 60Hz, as well as a more pronounced roll of in the high frequencies. The 30 IPS mode is generally a flatter response through the high-end with a “head bump” around 120Hz. See the frequency plots on pages 10 & 11.
BLEND
Controls the mix of pre and post tape signals. This allows the engineer to dial in a subtle amount of the tape effect, to better control the amount of saturation, tone and soft clipping in the post blend signal. As the signal gets more saturated, dialing back the blend can be a great way to impart the feel of tape, while maintaining a similar level of detail and transparency. NOTE: The blend control does not affect the Silk and Texture controls, as that circuitry is located at the physical output of the unit.
SOFT CLIP
A soft clip engages in the “True Tape” circuitry when the drive meter hits 5 (first yellow LED), and becomes more apparent at higher levels. The soft clip can be used as a way to tame overly transient material like drums, and can be controlled further by using the blend control.
SILK / TEXTURE
Pushing the Silk button engages the Silk Red circuit, and pushing it a second time introduces Silk Blue circuitry. Silk reduces the negative feedback on the output transformer, adding harmonic content as the texture is increased. Silk Blue mode features more saturation in the lows and low mids, whereas Silk Red accentuates the saturation in the high mids and highs.
LEVEL / DRIVE METERS
Two eight segment LED bar-graph meters are fitted to the 542 for output level and drive metering. The level meter shows the output level of the 542 before the Silk circuit, and the drive meter reflects the level on the “record head” when the tape effect is engaged. The soft clip circuit is present at Drive levels above 5. 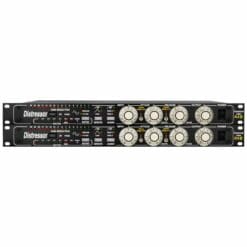 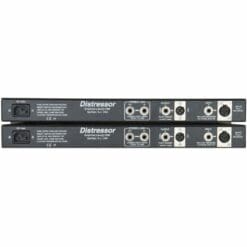 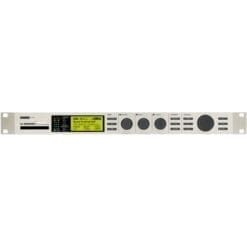 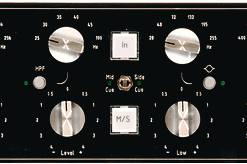 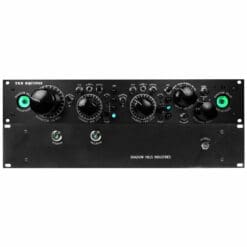 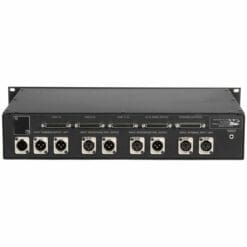